This is a large frame goat, rather well-muscled, with large drooping lob ears.
The Speckled Goat’s whole body is white with red, red-brown or black spots.
Northern Cape Speckled Goats of pure bloodlines breed true to this colour pattern, although this is a recessive gene – consequently, crossbreeding will change the colour pattern.
On the lower part of the legs, there is a concentration of colour – sometimes almost solid in colour.
The head is protected by a concentration of colour around the muzzle, eyes and ears.
The majority of Speckled goats inclines to have a white blaze on the forehead.
They are highly heat and sunlight tolerant.
In respect of productivity, Dr QP Cambell stated that the Skilder Goat is equal to, or better than any of the other types of goat breeds found in South Africa.
Contact Us 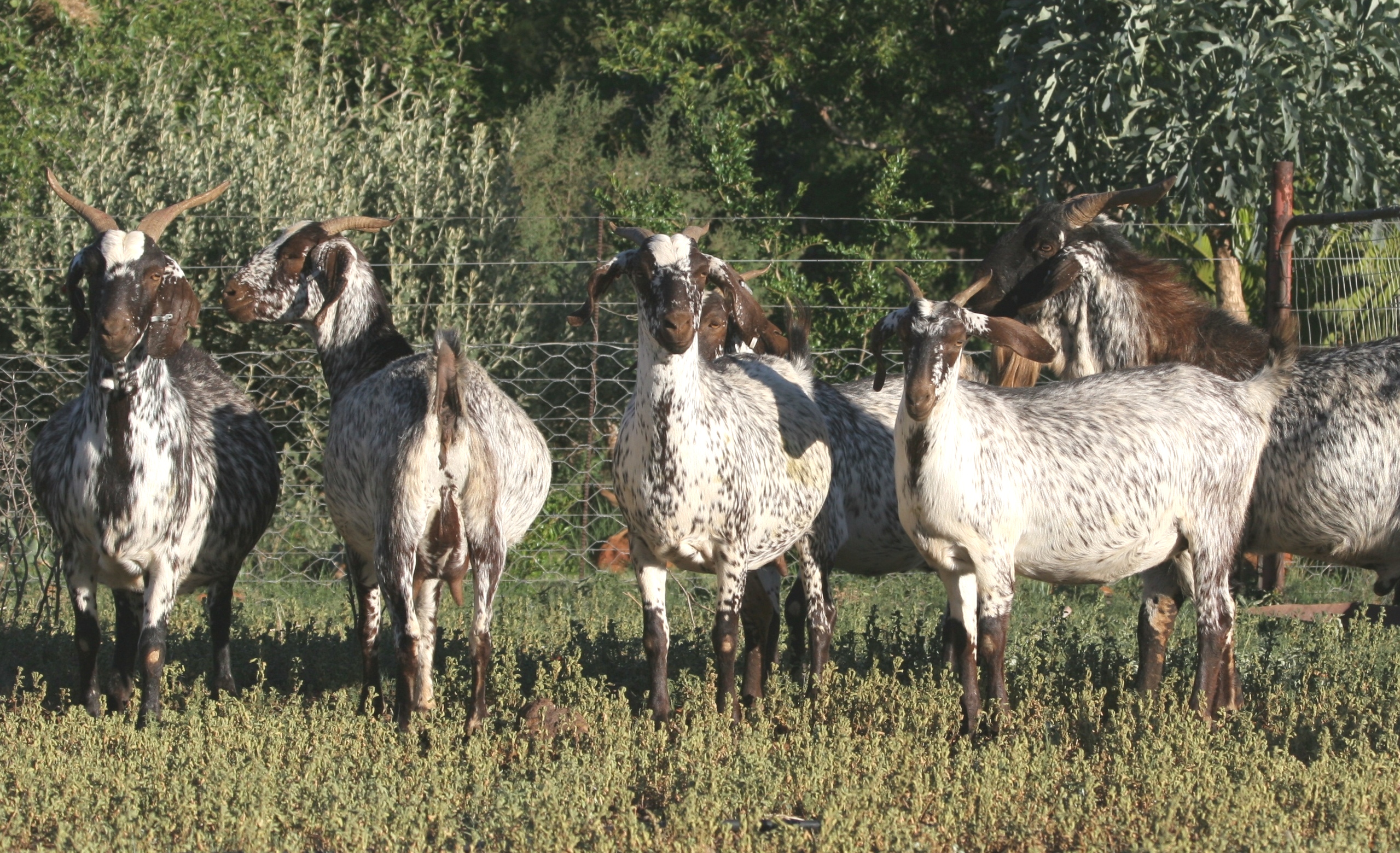 The Speckled Goat has its origin in the dry Northern Cape and Karoo area, stretching from Sutherland to Upington.
Barrow (1801) wrote that near the Hartbees river in the Northern Cape he encountered some “Namaqua Hottentots (Khoisan) who possessed a herd of small handsome goats that were spotted like the leopard”
The Speckled Goat went with pioneer farmers to Namibia, around World War 1 and the “Dorslandtrek” during the previous century. Here some Namibian farmers preserved them and kept them pure.
Over time breeders in South Africa bought Speckled Goats from these farmers, and brought them back to various parts of South Africa. 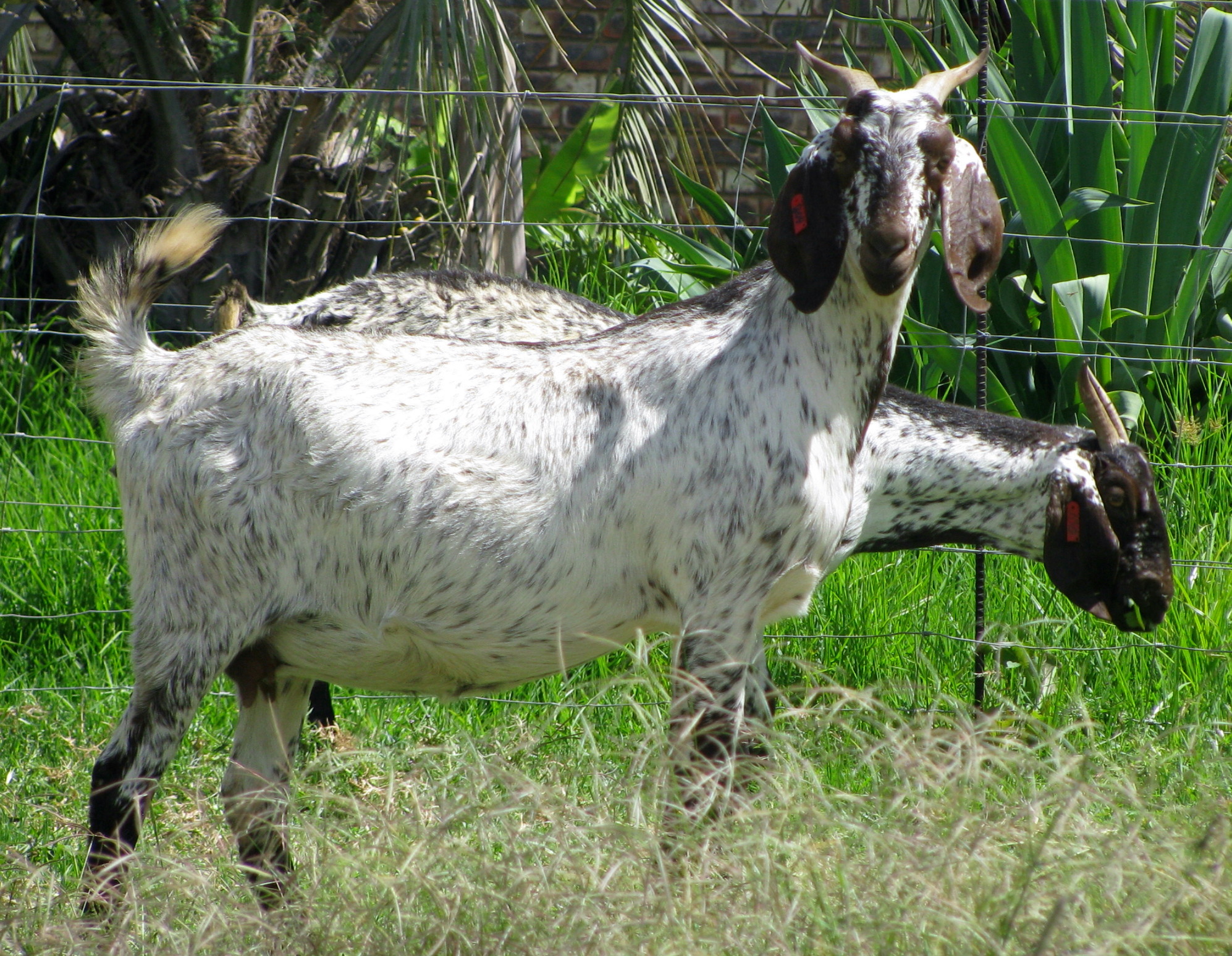 Head
The head is rather long with a profile that is flat or slightly convex (bulging),
The face is inclined to have a slightly convex nose bridge, with a slight dip in front of the eyes.
The muzzle is predominantly dark pigmented.
The ears are large and droopy (lob ears), and inclined to a more a-symmetrical shape,
Horns are present in both sexes and are more or less the length of the skull in mature animals.
Naturally polled animals occur rarely.
Female horns grow upwards and curve outwards, with the tips inclining to tilt inwards again – almost giving it a springbuck appearance.
In males, the horns also grow upwards, (some slightly backwards), and then curve outwards,
but are bigger and heavier than females.
Toggles (wattles) are present in some goats.
Beards are present in males, and a small percentage in females. Male beards tend to be large.

Middle piece
The breed has a good length and depth of body.

Hind Quarters
The males and females are well-muscled on the inner and outer thighs.
The breed has a sloping rump.
The tail is erect and of medium size.

Legs & Hooves
Legs are strong and medium to long. Hooves are predominantly dark in colour.

Colour & Hair Covering
The Speckled Goat’s whole body is white with red, red-brown or black spots.
The concentration of spots can vary from slight to heavy.
The head and legs are an almost solid colour, and the majority have a white blaze on the forehead.
They have a dark strip on top of the back, and on the front of the neck and chest.
Speckled Goats have excellent pigmentation with good colouration on the most vulnerable parts of the body (muzzle, eyes, ears, top of the back, lower legs, front of the neck & chest).
Most goats have short glossy hair and are inclined to grow cashmere in cold winters.

Male & Female Organs
In rams, the testes are of functional size and shape, equal in size and situated near the body.
The scrotum normally has no split and is not too long.
In females, the udders are normally well shaped and well developed, with more than enough milk for
twins and even triplets.
Poorly attached or droopy udders, cluster teats, and excessively thick bottle-shaped teats are undesirable. 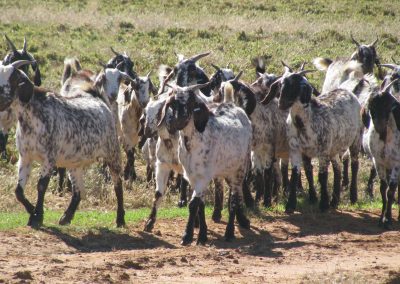 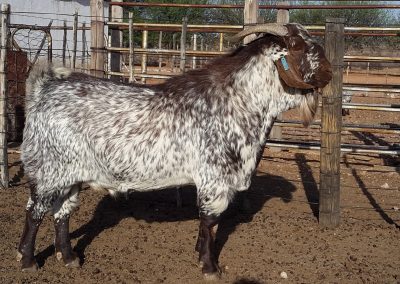 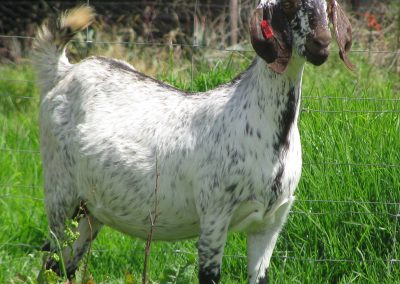 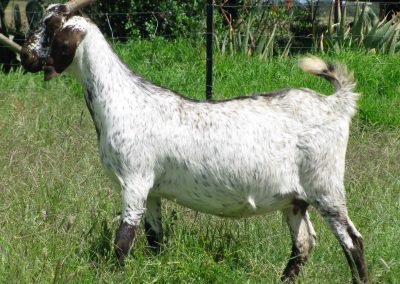 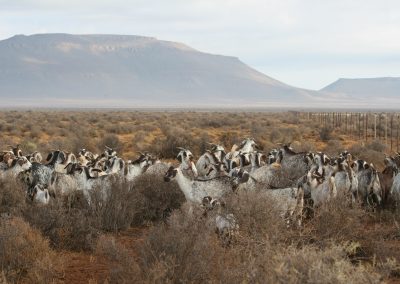 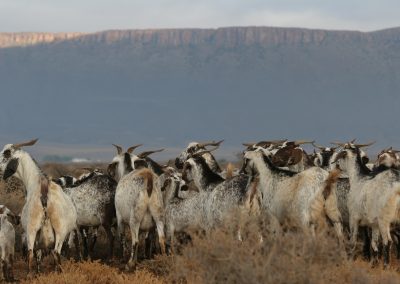 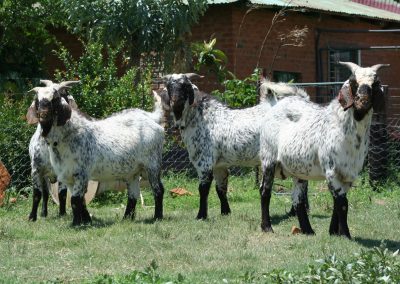 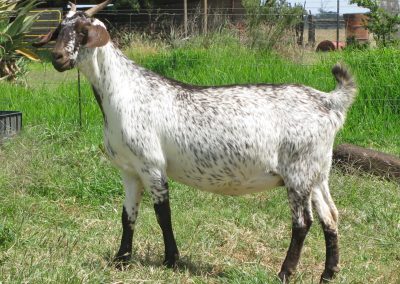 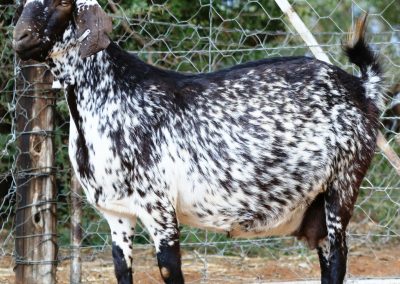 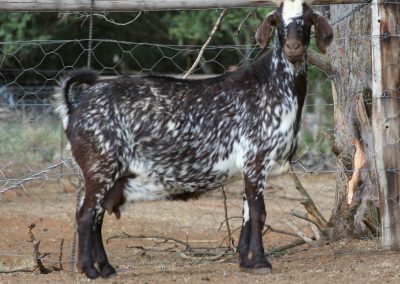